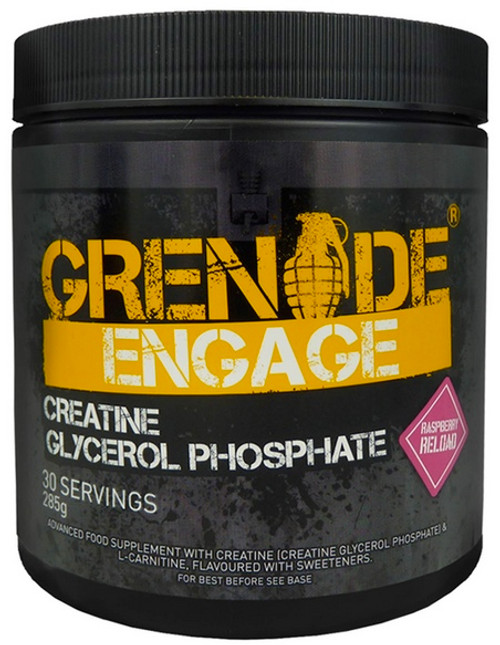 Grenade Engage is designed for athletes and military personnel who want to maximise their high intensity exercise performance, muscle mass and physical recovery. Grenade Engage is the most complete, advanced new creatine product on the market. It contains a totally new, cutting-edge creatine compound called Creatine Glycerol Phosphate - “CGP”, which is completely stable and is bound to both hydration and high-energy phosphate support molecules.

Most creatine formulas simply deliver a dosage of creatine to the muscles and often require a loading phase or large amounts of sugars to maximise their uptake into muscle tissue. Grenade Engage, with CGP, simply needs to be taken on its own, once daily. Just as importantly, the CGP creatine in Grenade Engage comes bound to its own phosphate molecule. It is a biological and metabolic fact that creatine must be bound to phosphate so as to have the capacity to regenerate the high-energy molecule

But it gets better! CGP also contains glycerol, well established in exercise science research as a hydration support agent. This may allow the muscles to take up and retain more fluid. Combined with the similarly well-known reputation of regular creatine to volumise muscles, this ‘1-2 punch’ along with the addition of phosphate, Engages a CGP ‘Onslaught’ in your muscles.

Grenade Engage also contains L-carnitine, the main metabolic role of which is mobilizing fat around the body. Carnitine has been studied by sports scientists for its reported ability to enhance athletic performance and increase the use of fat for fuel. So like creatine, L-carnitine may have both performance and body composition enhancing effects.

Alpha lipoic acid has been added to Engage because scientific studies alleged that it has a positive impact on insulin function in the body and effects on supporting creatine uptake and retention in the muscle cells. Finally, multi-component, patented Astragin has been added to Grenade Engage due to the impressive results scientists have obtained from studying its activity in Human intestinal Caco-2 cells, which have the responsibility for nutrient absorption from the gut.